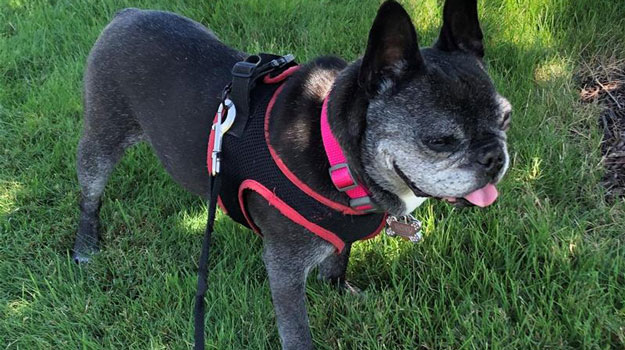 It had been three months since Brian and his French bulldog Roxy said their temporary goodbyes to wife and dog mom Julie as she made the family of three’s first leap to their new home in Michigan.

With the successful sale of their home in Ohio, the family was finally reunited and living the good life together once again. Though Roxy had been a birthday present for Julie eight years earlier, the energetic and friendly Frenchie had quickly chosen Brian as her favorite person.

Always on the move, Roxy loved to patrol the family’s yard and was constantly on the lookout for her canine pals, who would often pass by on their walks. Indoor laps of the home’s open floorplan were only interrupted by the occasional pause for a quick sunbath before Roxy was ready to go for another round.

Knowing how exuberant the now 8-year-old Frenchie usually was, Brian became concerned when he noticed that Roxy wasn’t acting like herself during their daily walk one day. She seemed unwilling to keep going, panting excessively and wanting to lay down. Cutting their walk short, Brian made a beeline back home. He offered Roxy some water but she refused, and when she turned her nose up at food as well, Brian’s concerns grew. Wondering if she might be overheated, he placed Roxy in the shower in an attempt to cool her off. When her panting didn’t subside, Brian knew it was time to seek veterinary help. 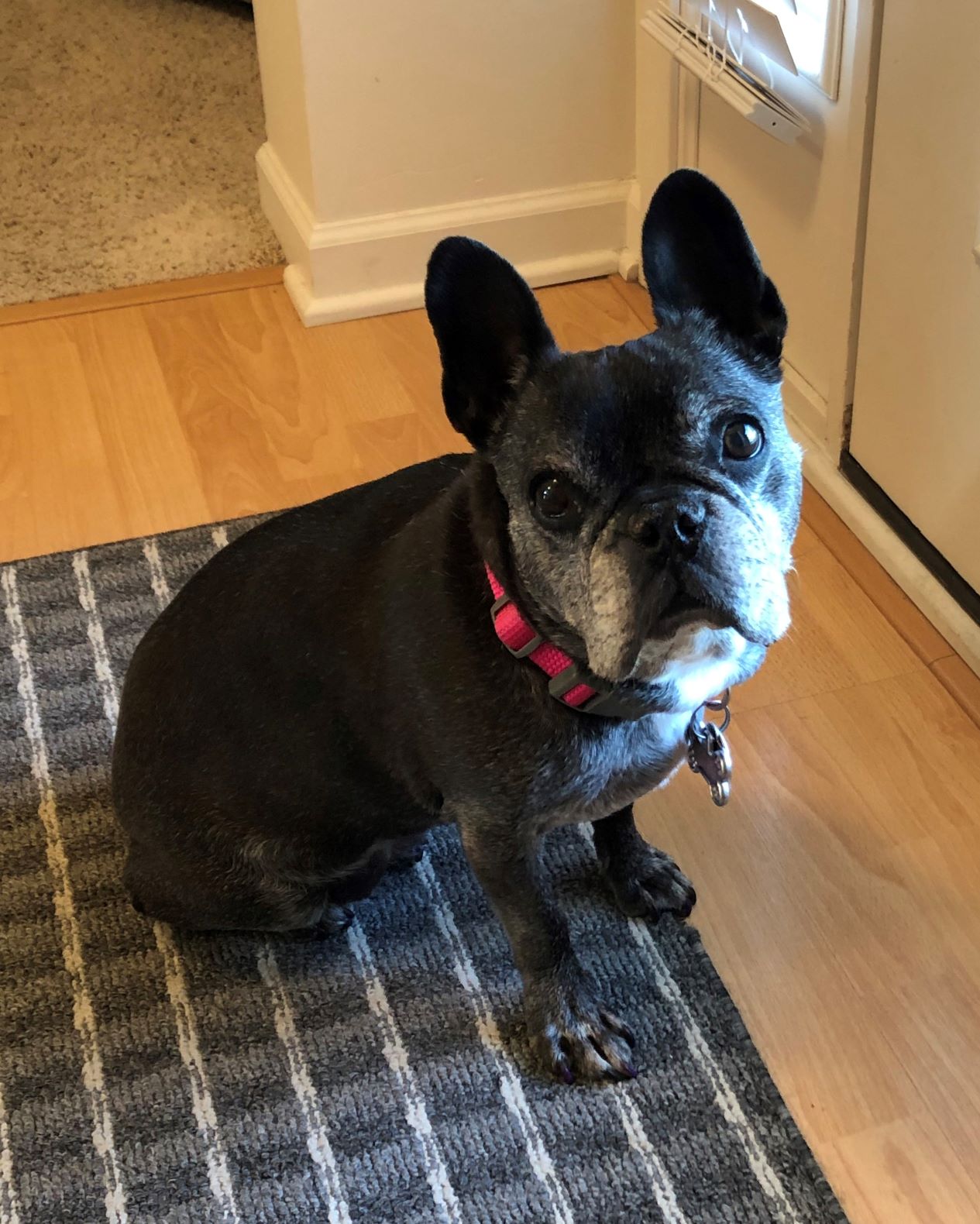 He rushed Roxy to the Blue Pearl Pet Hospital of Grand Rapids, Michigan, where the team quickly triaged her. They soon confirmed that her illness was not due to heatstroke and told Brian and Julie that Roxy would need to stay the night to determine the cause through diagnostic workup. The couple left the hospital, understandably apprehensive about what news the next day would bring.

Around 1:00 AM, a call came in from the overnight veterinarian. She informed Brian and Julie that a tumor had been found on Roxy’s spleen and that she would need emergency surgery to remove the spleen immediately to have a shot at survival. With little time to consider, Brian and Julie followed their instincts and agreed to proceed with the splenectomy. The following morning, husband and wife began to process the rapid progression of events and consider what this could mean for their little family’s future. With no children, they considered Roxy their baby and simply couldn’t imagine life without her.

Meanwhile, in the hospital, Roxy was recovering from major abdominal surgery. Her spleen had been removed and was sent to an outside reference lab to have the tissues examined to determine the type of tumor. After a 24-hour stay, Roxy was finally allowed to go home with her family to finish healing. Dr. Kim Egeler, the emergency and critical care veterinarian at Blue Pearl, discharged Roxy and told Brian and Julie that the next few days would need to be a period of rest for the normally active dog while they awaited the lab results. Back at home, Brian set up an air mattress  on the living room floor and camped out with the recovering Frenchie in their makeshift bedroom.

The lab report soon identified Roxy’s splenic tumor as hemangiosarcoma, a type of cancer that develops from the cells involved in the formation of blood vessels. Brian and Julie were then introduced to Dr. Christine Swanson, a Board-certified veterinary oncologist at Blue Pearl. Dr. Swanson reached out to the concerned pet parents to answer their questions and explain the potential treatment options. She explained that hemangiosarcoma is a somewhat common cancer in middle-aged to older dogs and that the spleen is a common site for this cancer to develop. Though it takes on different physical signs when it appears in various locations in the  body, Roxy’s decreased stamina, weakness and the panting she experienced while out on her walk are fairly classic symptoms.

“I was shocked by how well she tolerated the drug that we humans typically associate with a negative and sickly experience,” Brian says of Roxy’s chemotherapy treatment.

According to Brian, flexibility was a theme of the conversation led by Dr. Swanson. There was no pressure to follow any particular treatment plan and no commitment to stick with a treatment if they were to change their minds.

Dr. Swanson reviewed the statistics of survival with and without chemotherapy, knowing the couple wanted to give their girl every shot they could at a longer and healthier life. After weighing all the options, Brian and Julie decided to proceed with chemotherapy two weeks after Roxy’s surgery. The chemo was administered in the form of an oral medication given three times a week.

Though chemotherapy is differe 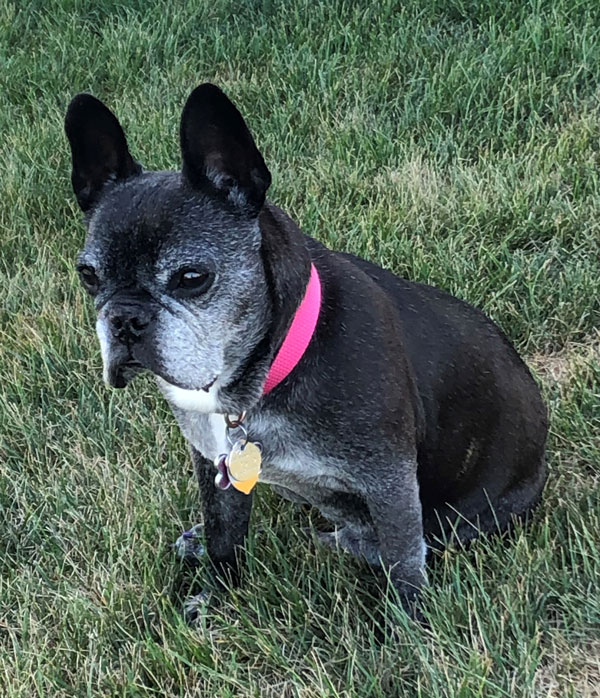 nt with every patient - human or furry - Roxy only occasionally experienced an upset stomach, for which Brian gave her an antacid as instructed. The dedicated dog dad also dug deep into his own research and supplemented Roxy’s treatment with immune-stimulating supplements.

Though the initial signs of illness first occurred in June 2018, by August of 2019, Roxy had been diagnosed, undergone a splenectomy and completed chemotherapy with flying colors. Throughout the course of her chemotherapy, Roxy returned to Blue Pearl and had radiographs performed every two months to check for signs that the cancer had spread to her lungs or kidneys. Fortunately, it never did.

Now ten years old, Roxy the French bulldog is as healthy as they come and continues living her life to the fullest. With the thumbs-up from Dr. Swanson, Brian and Julie maintain her routine with supplements and a combination of a home-cooked food combined with commercially prepared kibble. The beloved only-child even gets her meals topped with sirloin steak!

Brian and Julie say they have no regrets about their decision to seek the care of a veterinary specialist and are certain Roxy would not be here today without the hard work of Dr. Swanson and her team. Brian encourages pet owners to remember that “a diagnosis is not always a death sentence.” Because they sought out the expertise of a veterinary specialist, The couple learned that Roxy had a good shot at a long, healthy life. For them and many pet parents like them, that was a chance they would take again and again. 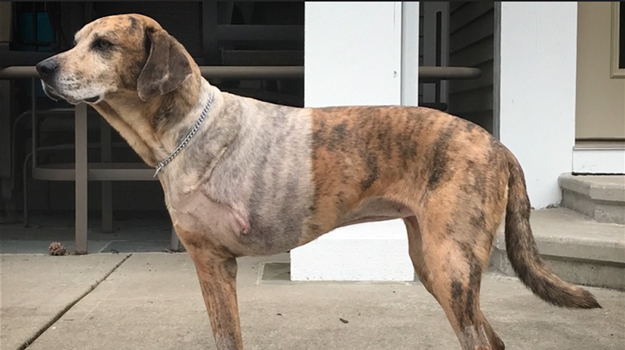